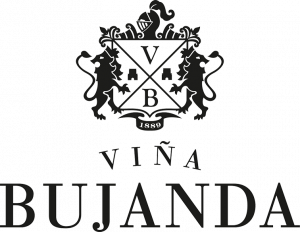 The wine assortment of Viña Bujanda completes the Familia Martínez Bujanda portfolio, with a clear concept of elaborating a more traditional profile wine from Rioja, with the Crianza and Reserva as a base, but not forgetting the traditional elaboration of Young wines (red, rosé and white) of DOCa.

The winery combines the family tradition of these wine producers with the most modern techniques in the elaboration of wine which is conveyed to the iconography and the labeling of the wines, with a modern image illustrated with a classic typography.

Viña Bujanda is the project that Carlos and Pillar Martínez Bujanda decided to launch at home, Oyón, where their great-grandfather, Joaquín Martínez Bujanda, founded the original family winery, that has created this dynasty of vine growers and wine makers, whose fourth and fifth generation are now in charge of the business.